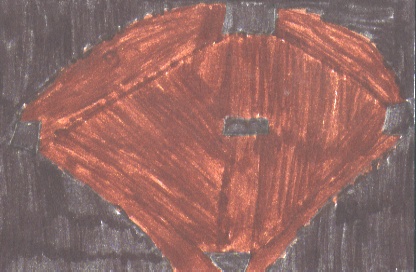 One day the father of a young boy who loved baseball found an empty field in a desert. So the father and the boy will set up teams, they will invite their neighbors to play baseball. There are four teams, and they will make jerseys for each team. Each team will begin playing on Monday afternoon. Each team will play each other twice, than the play-offs will start. Then came one of their last games of the year to decide on the championship. It was the bottom of the ninth inning; the blue and white stripe team was winning 3 to 2. One of the guys was on second base, and there were two outs. The boy hit the ball it went over the fence and the boy's team wins the game.

I like the boy because he never gives up in doing something like in his baseball games, he is always trying to be the all-star and the best. To me he is a very good athlete. He has confidence in himself; he does not have a very bad attitude and a temper. This story reminds me of myself, because I was on a baseball team when I was younger. Sometimes I want to be the all-star and try to be the best. I do not have a bad attitude.

My favorite part is when the boy and the father saw an empty field and decided to make a baseball field. Then the boy asked the neighbors "Do you want to play baseball," then the parents made the jerseys for the kids to play baseball. Then the season began. I would recommend this book to my friends. The reason is because it is a very challenging and exciting game. The home run that was made to win the game was very exciting. A baseball player would like the book. It is about baseball.

Khasad I.
is a student in
PAL - New South Bronx