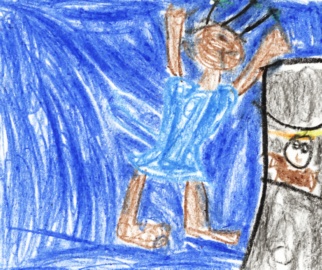 This book was about a girl named Cassie, who needed to find her brother Be-Be in the underground railroad. This story was very different. It was partly true and partly imagination. But there was a lot of stuff about slavery times that we didn't know. For example. We didn't know that moss grew on the north side of a tree and we didn't know that slaves got their foot cut off sometimes.

So while this was not a really happy story. It did make us think about slavery times. This is a good book to teach little kids about slavery and how black people wanted to be free. We also learned how the slaves used the underground railroad to get free.

Shana B. and Jalisa P.
are students in
PAL - New Harlem Center