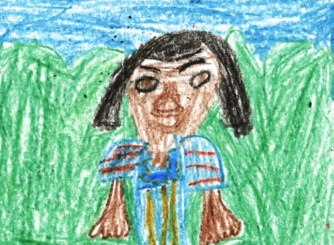 This story is about a girl named Esperanza and her grandmother named Abuela. Abuela taught Esperanza how to weave. And they made a special trapestry to sell at the Fiesta de Pueblos in Guate (That is in Guatemala). They also made a lot of other things to sell. Their family needed the money very badly. When they were done, they got on the bus to go to the city. When they got there Esperanza got lost, but she kept walking until she found the market. She was scared to try and sell her stuff because she thought the stuff the other people had was better. But everyone liked Esperanza and Abuela's stuff the best.

It was very interesting to see how Abuela learned to weave. And the colors of the pictures were wonderful. I really liked when she took the bus ride to town, but my favorite part was when she laid out her artwork to sell to all the people.

This story is a good one about a little girl that is "way mad" different from me. I wonder what it is like to live where there are no big buildings? I think this is a good book to read. Anyone who likes to think about far away places will like this book.

Nyshera H.
is a student in
PAL - New Harlem Center