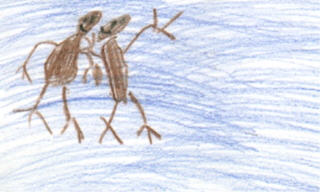 Do you love to eat spaghetti? Well this story is about a monkey who loves spaghetti. Everything she does, she does it with spaghetti. There are two monkeys in this story; one who loves to eat spaghetti and the other monkey loves to play. They are mate and female. The male monkey asked the female monkey if she wanted to play with him, but she said no. Do you know why she said no, because all she wanted to do was eat and eat? There were spaghettis everywhere.