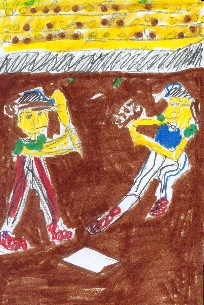 This book is about a baseball player and he wanted to be in a baseball league. Tip O? Hara is one of the best players in the 12 and 13 year old league. But when he is in a 14 year old league he is getting worse because other kids could be better than him. But he still is a good player even though he got worse. It is just some kids is higher level than him. It takes place in a big baseball field. He has many friends and exciting moments and also he had made the team. He is a helpful player that helps his teammates. The kids in his team sometimes cheered Tip O? Hara.

The part I liked least was Tip was being weak for his teammates. I like this book because baseball is one of my favorite sports.

I would recommend it to a friend who loves baseball because it?s their favorite.