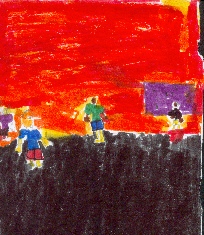 The main character in my book is Eric Liddel. The problem in the story was there was a war going on and it was hard for him to see his family. This was because he was in a different part of the world. He was gone because he was a preacher that worked with his brother Rob in Siaochang. There was no solution to the problem according to the book.

If I could, I would solve the problem by staying with my family and start preaching in another church. I liked specific parts of the book, such as when fell in the race. He got up, didn?t brush himself off , ran with all his might and still won the race. Something I didn?t like was when he stopped running because I believe he could have won so many more races.

I would recommend this book to a person who likes to run because it might give them courage to be like Eric Liddel and run. Then they would accomplish their dream!!!!!!!!!!!!!!!!!!!!!