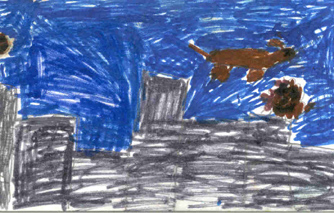 This book is part of the Captain Underpants series. It is about a baby super hero who rescues the city from Deputy DooDoo. Super Diaper Baby uses his brain power and strength to save the day. He has a helper named Super Dog who used to be a bad guy named Danger Dog. Together they work to protect the city.

My favorite part of this book was the ending. It's a surprise, so you'll have to read to find out how it ends. I like this book because it is funny and written like a comic book, with simple pictures to go along with it. I also like it because it's silly. The main character wears a diaper!

Zachary T.
is a student in
Ms. Schofield's Class