Written by Janet and Allan Ahlberg 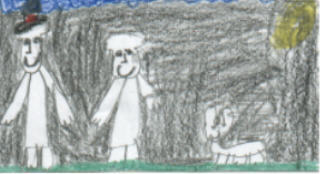 I liked this story because it was very funny and it make me feel good.

My favorite part was when the big skeleton grabbed the little skeleton?s foot and he fell down.

I learned that being alone is not much fun, but when you have company you always have much more fun because you have somebody to share your fun.

I recommend this book to beginning readers who are interested in reading a funny and scary story.