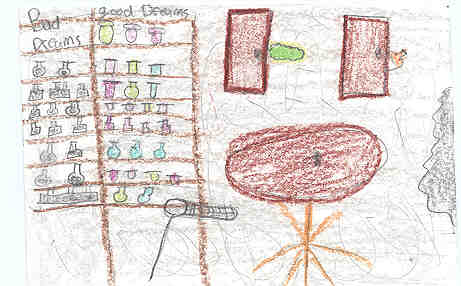 The book I read is called The BFG. The book is about a little girl named Sophie, who saw a giant named The Big Friendly Giant. She wasn't supposed to see the giant, so he had to take her back to his home. When she got there he had to hide her because the other giants eat little kids. But the BFG eats snozzcumbers and gives good little kids good dreams and gives bad kids nightmares. The difference between the good and bad dreams is that the bad dreams are black and the good dreams are clear. When the Queen of England finds out that kids are disappearing, Sophie hears this and tells the BFG, "we have to tell her that the bad giants are gobbling up little kids and maybe she can do something." So the BFG makes up a dream about a girl sitting on the Queen's window and the girl tells her about the giants gobbling up little kids. When she is asleep, the BFG gives the Queen the dream. When the Queen wakes up, her maid comes in and says, "There is a little girl on your window." The Queen said, "I just had a dream about a little girl on my window and she told me what was happening to the disappearing kids. Let her in." Then Sophie told the Queen the exact same story in her dream. If you want to find out what happens to the giants, you should go to your school or public library.

My favorite parts of The BFG are when the BFG takes Sophie from her orphanage, when he ate the snozzcumbers, and my other favorite part I can't tell because it would give away the ending.