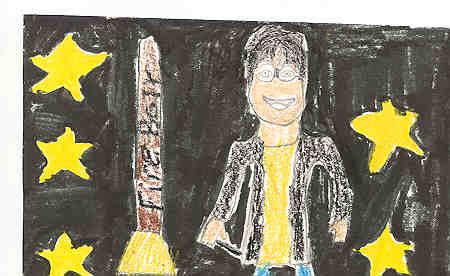 Wow! That was a great book. I just finished reading Harry Potter and the Goblet of Fire. It begins out when Harry has a dream that Voldermort is still alive and he is talking to Wormtail (who is really Peter Petigrew) telling him about his plan to kill Harry. And in Harry's dream there's someone spying on Voldemort, which later on in Harry's dream is killed. Then all of a sudden he wakes up with his scar hurting. In the next couple of weeks, Harry gets a letter from Mr. and Mrs. Weasley that asks him if he can come to the Quiditch World Cup and then stays with them for the rest of the summer. So Harry asks his really mean uncle if he can go but his uncle said no at first but when Harry mentioned Sirius, which the Dursleys thought he was a murderer (but he really wasn't) his uncle said yes. After that Harry wrote back to the Weasleys saying he could come. When the day had come for the Weasleys to come they didn't come were they late or did they forget Harry. To find out if the Weasleys come read this book.

I think this book was very good! I liked it very much. I liked this book because it's a mystery and its fiction. My favorite part is when Harry has to do the first task. This book is part of a series as any Harry Potter fan would know, it talks a lot about the other three books.

I recommend it because I think it's a really cool book. I recommend this book to kids in 5th grade and up. I think just about the whole book would interest people the books a mystery.