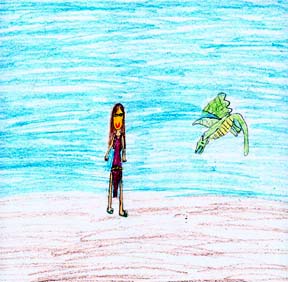 The Sign of the Dove is so interesting, because it leaves you in such suspense. It is so mysterious. It?s about a girl named Lyf. She caught Vermillion Fever, a sickness so severe that no one has ever survived from it. Her adopted sister, Kaeldra, obtains Dragon?s milk and manages to save Lyf from this devastating disease. The only problem is, it left Lyf?s eyes green. Having green eyes means you can communicate with Dragons. Dragons are being hunted down, all because of the legend that says that if you eat a Dragon?s heart you will be invulnerable to the sword. So, with all that trouble going on, Lyf is left with the dangerous position of saving the newly born Dragon hatchlings from the terrible claws of their enemy. The only thing to cause a problem with this position is Lyf?s condition. She?s still quite weak from Vermillion Fever. So the only question here is: Will Lyf survive?

My favorite part is when Lyf and her friends rescue the draglings from their greedy enemies. The soldiers have pipes that put the dragons in a trance so that they have time to attack. Lyf and her friends purposely made so much noise so that the dragons were not put in a trance, and saved from the soldiers. I like this part because it proves that children can be heroes too. I like how the author puts an everyday person as the narrator. I think Susan Fletcher writes so amazingly that if you were to read this book it would put you in a state of awe. I like this book because it teaches you not to give up. It teaches you to keep trying even before thinking of giving up. It also teaches you to be confident in yourself and others.

This book is in a series, so read Dragon?s Milk first, Flight of the Dragon Kyn second and then, The Sign of the Dove. I think this book is really great. When I read it, I was amazed. I hope you read this book and feel the same way I did.