Wayside School Gets A Little Stranger

Wayside School Gets A Little Stranger 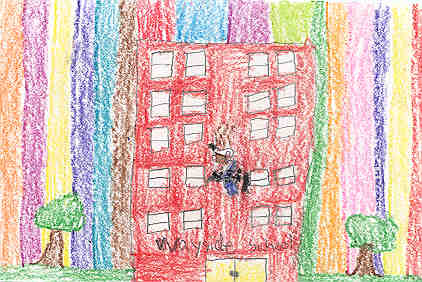 Darn! A substitute teacher. This story is about a class that has many evil substitute teachers because a nice teacher, Mrs. Jewls, was having a baby so she had to leave. The class had three substitute teachers. Their names were Mr. Gorf, Mrs. Drazil, and Mrs. Nogard. Mr. Gorf had three nostrils. He used the middle nostril to suck the voice so Mr. Gorf could talk with their voices and the children couldn't talk. He called their moms with the children's voice and said hateful things to their parents. But the children got their voices back and got rid of Mr. Gorf. Mrs. Drazil was just plain mean. The class got rid of her by chasing a bad student twenty-six years ago. They were never seen again. Mrs. Nogard had three ears she had one on top of her head. It was always covered in hair so it was never seen. She used the third ear to listen to people's thoughts. Whenever kids didn't know a question she would call on them so they would get it wrong.

I thought this book was a great book because it was weird and interesting. My favorite part was when Mrs. Nogard would make the whole class feel bad. This book is a part of a series. The other books are Wayside School is Falling Down, and Sideways Stories From Wayside School. This book is like the other books because it is cool. The books are cool because the stories are very imagitive and have many surprises. One surprise is when you find out that Mrs. Nogard has a third ear.

I recommend this book to people who like to read about really funny stories. I thought it was funny because the students always thought of good plans to get rid of their teachers in hilarious ways. I also enjoyed how Mr. Gorf could talk in the children's voices because he could suck them out with his third and middle nostril.