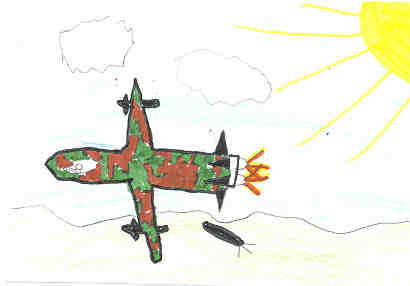 This book is called Basher Five-two. It is about an F-16 fighter pilot named Scott O'Grady. His plane gets shot down and he has to live behind enemy lines for a week. When his wingman does not see a parachute he thinks he could have died in the explosion of the land to air missiles. Captain Scott O'Grady was praying a lot when he was behind enemy lines. If you want to find out what happens next you will have to read the true story of Captain Scott O'Grady.

My favorite part about this book is when Capitan Scott O'Grady gets rescued by the marines. This book was funny and interesting at the middle because he had to eat leaves and ants and has nothing else to eat except when he gets on the helicopter. I though the ant part was nasty. There are no pictures in this book but there are some real photographs of when he was little to when he started to fly F-16.