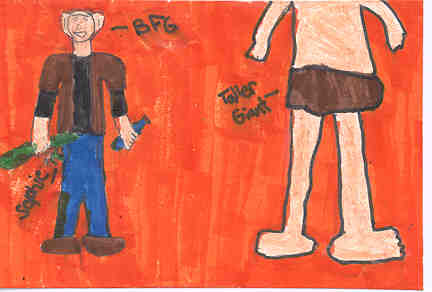 Sophie is an orphan (and the star of this book); she lives in a building with other girls without parents. One night Sophie can't fall asleep. As she lies in bed she sees something outside the window. It's a giant! Before she can think she is snatched out from her bed and taken to giant country. There she learns that all giants eat humans, except the BFG (the giant that took Sophie). Sophie and the BFG find their differences and keep away from the evil, even taller, human eating giants that know there is something suspicious going on. If you want to find out what happens to Sophie and what BFG stands for then maybe you should read this book.

I like this book because it is very funny and creative. There are giants up to fifty feet tall. My favorite character is the BFG because he is the nicest and shortest giant, and of course he doesn't eat humans. Out of all the illustrations. I think they really described the story. This book reminds me of how short I am, whenever I stand next to someone tall I feel like I am facing a giant. This reminds me of how Sophie probably felt when she saw all the giants.

I recommend this book because it is very interesting. The words that are in this book are very describing. When you start to read this book you won't want to put it down from beginning to end. Anyone who likes creative or fictional stories would probably like this book.