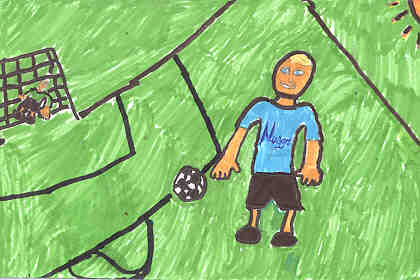 He shoots ... He scores!!! And the Nuggets win again!!! The book Soccer Halfback, by Matt Christopher, is about a kid named Jabber. All his life Jabber had played football because his dad had played on the Notre Dame team, but one day he decided to try out for soccer. He found out that he was really good at it but his brother Pete and his mom tried to make him stop playing soccer and play football like his father did. His friend Mose interfered with his decision by telling Peter's friend that Jabber was thinking about playing football instead of soccer. After Peter found out about that Jabber almost did play football instead of soccer. Read Soccer Halfback to find out how Jabber handles his problems.