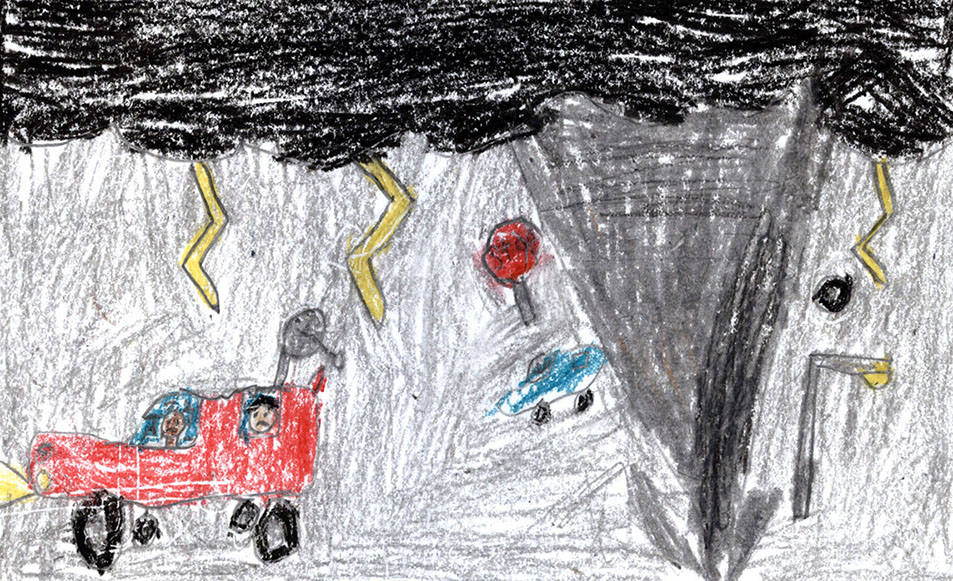 Are you interested in books with a character who has to avoid a lot of danger? If so, I think this book is for you! Dexter James misses his brother who is in the Navy Seals. He decided to take a bike ride and ignored the stop sign. Then he was about to be hit by a car when his dog pushed him off into the side walk. Then he discovers the driver is Dr. Noman Gage, a famous storm chaser that was friends with Dexter's dad. He invited him to go storm chasing. Of course, he accepts. Dexter gets a tour of the storm chaser SUV and launches storm pods into the sky. But then something unexpected happens. It start to hail in massive chunks. It cracks the car windows like a peanut shell, dents the roof of the car and nearly hits Dexter right in the head. But then something MUCH worse comes along when they are heading back to Joplin. If you want to know what happens, you are going to have to read the book. It is full of unexpected situations.

In my opinion I really liked this book. It has a lot of adventure and was tense and I love books with adventure. I also like things that make people feel tense. I also like chapter books and this book had 15 chapters. My favorite part was when Dexter traveled back to his neighborhood after the tornado and discovered everything was destroyed. But then he found his dog Zeke and his parents soon after. I liked this part best because it was first, kind of sad and then it became a happy ending. Lauren Tarshis makes a ton of books and this book was like another book called "I SURVIVED The American Revolution." These books are similar because they both have 11 year old characters trying to survive something that can kill many people. They are also both invited to do something. Dexter is invited to go storm chasing and Nate (11 year old from other book) is offered to clean and help around the army camp.

I would recommend this book. I would because it is adventurous, tense and has some action. I think many people like books with these genres. I also found it interesting because I learned a lot about the Joplin Tornado. It was not just a story about a kid trying to survive the tornado, it gave facts like the tornado sirens went off almost every week and some people might not have believed the sirens and just continued their day. I think readers in 3rd grade and up might like this book. It is the perfect reading level and it was it was not too long but not too short.

James B.
is a student in
Mrs. Constantinides' 4th Grade Class