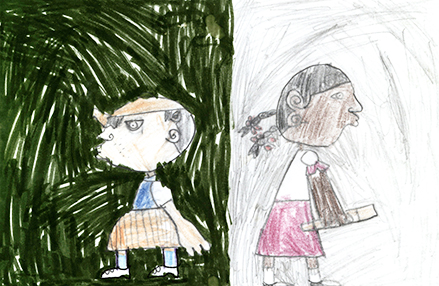 This story is about how segregation in the schools turned into integration in California. This story is about a girl named Sylvia Mendez and her brothers who have to go to the Mexican school because they have brown skin even though they are American citizens. Their dad asks people to support them to have everyone go to the same school but no one wants to because they don’t want to get in trouble so he gets a lawyer. Then Mr. Mendez files a lawsuit and they have a trial. On the first day the school superintendent said the reason why he wasn’t letting Mexican kids in the white school was because they had to learn English, and he thinks that they are dirty and they don’t have good personal hygiene. He felt that white kids were superior to the Mexican kids. The Mendez family won the case but the case was tried again. Read the book to find out what happens in the second trial.

We think this book is interesting because it involves segregation and we are interested in that. We think this is a great book because it talks a lot about history. Kids can learn that kids being separate is never equal because kids need to socialize with other kids not separated depending on their background and also it’s unfair because the white kids get special treatment in their school and the Mexican kids (or other kids) get crummy, old, run-down schools.

The illustrator uses a style that is like a style used in the Mexican culture in ancient times.

We recommend this book to whoever is interested in segregation and history about how the law changed in California.

Jack P. and Ryan A.
are students in
Westport Book Club