The Legend Of Rock, Paper, Scissors

The Legend Of Rock, Paper, Scissors

Reviewed by Abdullahi A. (age 8) 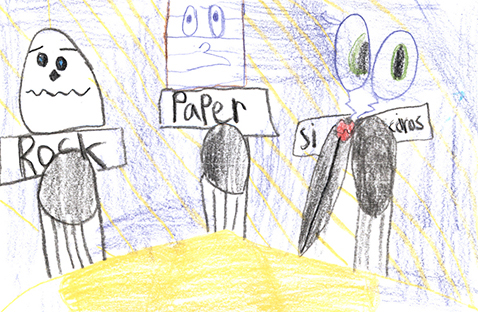 There were three warriors that were borne. Rock came from a yard, Paper came from an office, and Scissors came from a drawer. No other Warrior could beat them. Rock battled clothespins, apricot, he beat every enemy in the backyard. Paper battled a printer and a bag of trail mix, he beat every enemy in the office. Scissors battled a roll of tape even chicken nuggets, but no one could beat him. What will happen when Rock, Paper, and Scissors finally meet?

In my opinion I think the story was outstanding. I like the pictures. For example the hill is orange and pink. I thought the book was funny. It was very funny when the Rock told the clip to put down some underwear. The characters were good. I like that Paper is smart. I also liked that all of the characters are strong.

I recommend this book for kids who like adventures and also to people who like books with warriors and battles..

This is a great book.

I give this book a five star rating!

Abdullahi A.
is a student in
Ms. Witt's 2nd Grade Class