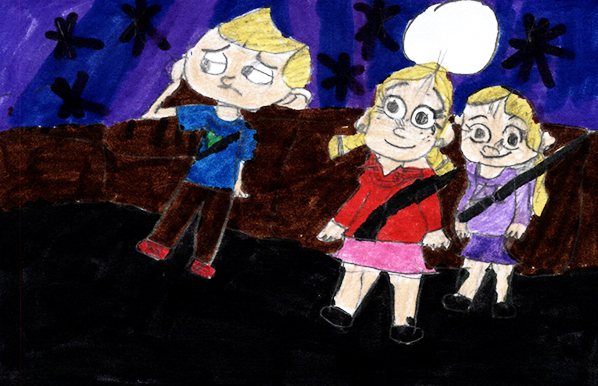 The main character of this book is Zack. He has a mom, a dad, and twin sisters named Cathy and Charlotte. He also has a pet dog named Luna. The family is about to move. Zack is very unhappy about this. He worries he won’t make any friends. It is a big move. They are leaving Earth and moving to a planet called Nebulon! He is so nervous about the move that on the way to Nebulon he has a nightmare. He dreams that his classmates were monsters and his teacher was a two-headed snake! Once they land on Nebulon, they meet a man named Fred Stevens. Mr. Stevens is his dad’s new boss. He takes them to where they will pick up a new car. To cheer up Zack, he was allowed to choose the type of car. Zack picked up a green box that turned into a car! Zack thinks this is very cool. They went to their house. It has a flying elevator! The girls thought their rooms were awesome. Everything was pink! Absolutely everything! Zack was bored of looking at the room. He wanted to look at his new room. It was his favorite color green and he had his own special desk. He was feeling thirsty so he went to the kitchen. In the kitchen he met I.R.A. I.R.A stands for Indoor Robotic Assistant. IRA gave Zack a glass of lemonade and his picture was on the cup! He was surprised. Later that night at dinner, Zack tells his family that he really likes the new house and maybe Nebulon wasn’t so bad after all. Just when he was feeling happy, his mom reminded the children that school was the next day. Zack suddenly felt incredibly nervous. What about the two-headed snake teacher? What about the classmates who were monsters? Was it really going to be as bad as his nightmare or would school turn out to be just fine? You’ll have to read the book to find out!

The illustrations by Colin Jack are very good. I think it is good the author, Ray O’Ryan wrote about being anxious about moving and going to a new school. A lot of kids can relate to this. It is not all serious though. This book is also funny, like the futuristic world the author creates.

If you like cartoons and funny books, I would recommend this book to you. It is a good book for 2nd to 4th graders. This is also a great book for anyone who has ever had to move or go to a new school. You will understand how Zack feels and you will be able to connect to the book. Happy Reading!