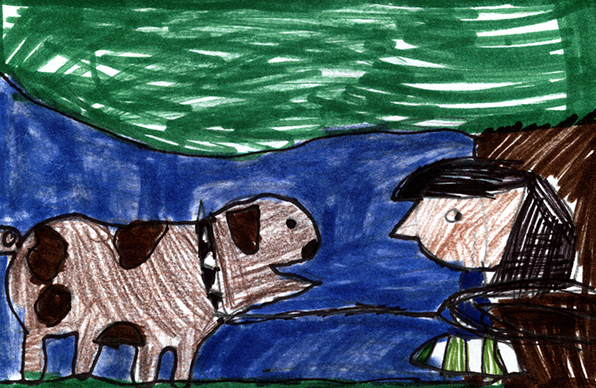 Lulu wants to buy a toy but her parents won’t give her the money for it. They told her she needed to earn the money to buy it. There is a boy named Fleischman. He is a hard-working boy so he earns a lot of money. Instead of looking at him as a role model and doing the same, Lulu went to his house to tell him to stop earning money so there would be some left for her! After she left Fleischman’s house, Lulu started to consider getting a job. Lulu thought about what kinds of jobs she could do. Finally, she had it! She could be a dog walker and earn some money! She made some flyers. The very next day she was already getting calls from some potential clients. The following day, she went to meet her clients and their dogs. The first dog she met was named Brutus. He was a very big dog, and because of this, the owner was going to pay her double! The next client she met had a very small and very spoiled dog named Pookie. The owner was very demanding and had a long list of instructions. The next dog she met was named Cordelia. Cordelia was hiding from Lulu and the owner, and it took forever to find her! Lulu went home to get ready for tomorrow. That night, she had nightmares about what could go wrong. She dreamt Fleischman was standing next to her saying, “THREE dogs you’re walking?!? BIG mistake!” Tomorrow would be her first day at work as a dog walker. Will she be successful or will it be a huge disaster? Maybe this whole dog walking business will be a total nightmare? You will have to read the book to find out!

My favorite part of the book is when Lulu is walking the dogs. It is funny to see how she interacts with them and how she tries to manage the situation. I think Lulu is very funny. I laughed a lot while reading this book. I think Lulu has a bad temper. Lulu throws tantrums when she doesn’t get her way. She loses her temper easily, like when she was yelling at hard-working Fleischman for being hard-working and earning money!

I recommend this book for children ages 8 to 10, if you are reading it on your own. Younger kids aged 5 to 7 would find it very funny if somebody would read it aloud to them. Also, anyone who has a pet dog or loves dogs would like this book. If you like funny books, you’ll enjoy it, too. Judith Viorst, the author, even leaves a funny note at the end. I give this book 5 stars out of 5 stars!