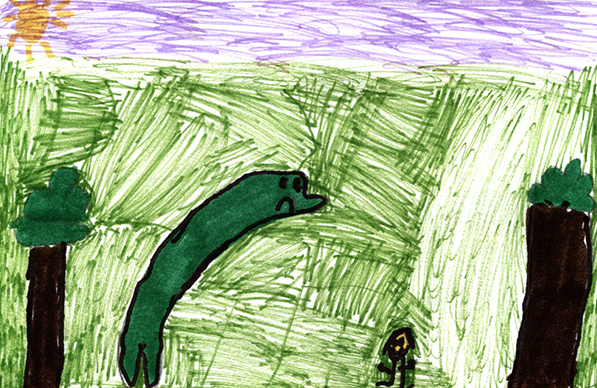 Lulu is a little girl who got everything she wanted and believe me--she wanted everything! If her parents ever said “no”, and I get a feeling they said it a lot based on Lulu’s requests, she threw a huge fit. When Lulu doesn’t get her way she screams and throws a tantrum. This is so funny to read about but it probably isn’t funny in real life. One year, Lulu decided she wanted a pet brontosaurus. Her parents said no. For days they argued. Her parents offered her a pet rabbit or a pet rat but Lulu wasn’t giving up on the idea of a brontosaurus. 13 days later, she decided she had enough arguing about it with her parents. They weren’t giving in and Lulu wasn’t giving up! She did not listen to her parents so she went to the forest on her own to find a brontosaurus. In the forest, Lulu meets a snake, a tiger, and a bear. Then, Lulu meets a brontosaurus. She immediately tries to put a leash on the brontosaurus but it doesn’t work. Then the brontosaurus told Lulu SHE would make a good pet! Lulu does not like this idea at all! Lulu starts fighting with all the animals in the forest! Lulu manages to outwit them all. Lulu decides to leave the forest. Does Lulu return home with a pet brontosaurus? If so, will her parents let her keep it? You will have to read the book to find out!

The author, Judith Viorst, has a great imagination. When the tiger got tired of Lulu’s behavior he told her he was going to eat her as his afternoon snack! Instead of getting scared, Lulu gets mad and hits him over the head with her suitcase that she took with her to the forest! Lulu and the Brontosaurus is so funny! Even the illustrations are funny. One of my favorite pictures is of Lulu’s suitcase. It is the only thing on the page and what makes it extra funny is that Lulu didn’t pack anything in it! It sure came in handy with that tiger though! I think Lulu is a very determined person. She never gives up!