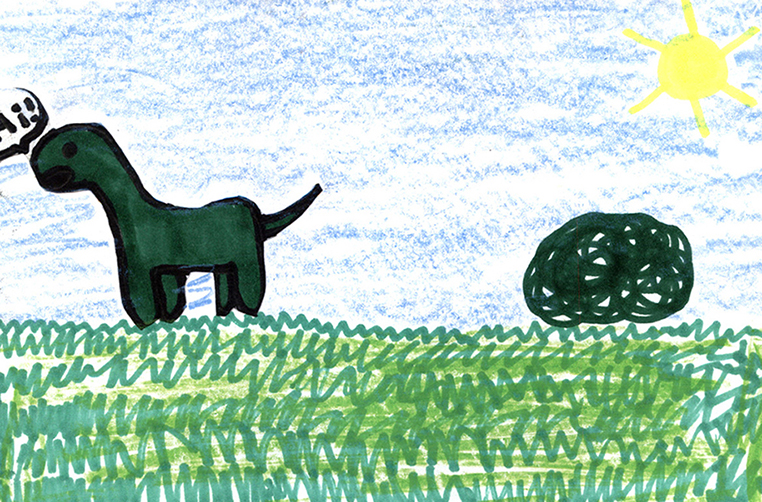 Lulu and the Brontosaurus is a book about a girl that wants a brontosaurus for her birthday. In the beginning when she asks her parents if she can have a brontosaurus her parents said “NO!” Lulu does not like to hear the word NO so she flops herself to the ground and waves her arms and legs and screams. After that she realizes that her parents won’t get it for her so she begins her journey to find a brontosaurus by herself. On her way she comes upon a snake, a tiger, and a bear. The snake wants to squeeze her dead, but she squeezes him instead. After that she comes upon a tiger who wants to eat her up for his afternoon snack because he says she’s a pain, but she hits him with her suitcase first. She was fighting all day but that didn’t stop her. Finally she gets tired from all that fighting and goes to sleep. But when she wakes up a brontosaurus is standing right in front of her. “YES!” Lulu shouts. She is thrilled to find a brontosaurus. Read the book to find out if Lulu gets to keep the brontosaurus she has been looking for.

Lulu and the Brontosaurus is a book that shows drama and it’s a laugh out loud book. There are many illustrations in the book, but I really like the two where Lulu is mad in the beginning but happy in the end. They show that she has changed. She is also in the same pose in those two parts with her arms crossed.In the first one on page 5, she is grumpy and frowning, but in the second on page 111, near the end, she still has her arms crossed, but in a good way. Lulu is smiling. I also like the illustration on page 13 because when Lulu doesn’t get what she wants, she gets mad and flops on the floor, waves her arms and legs until she gets what she hopes for.I have learned some lessons in the book but this is the one that really stands out. The lesson is just because you want something doesn’t mean you should get it unless you get it yourself and don’t complain to your parents about it. This is my favorite lesson in the story because if you always get what you want and tell other people to get it for you, you will become rude, bratty, cold hearted, and other things that are bad. Also, Lulu learns that she doesn’t always get what she wants and she can get what she wants by herself and not scream at her parents for it. I also have many favorite scenes but my favorite one is when Lulu comes home riding a brontosaurus. It’s my favorite scene because Lulu has been looking for the brontosaurus and persists until she got one. She got prouder and prouder the whole ride home riding on the BRONTOSAURUS’s back.