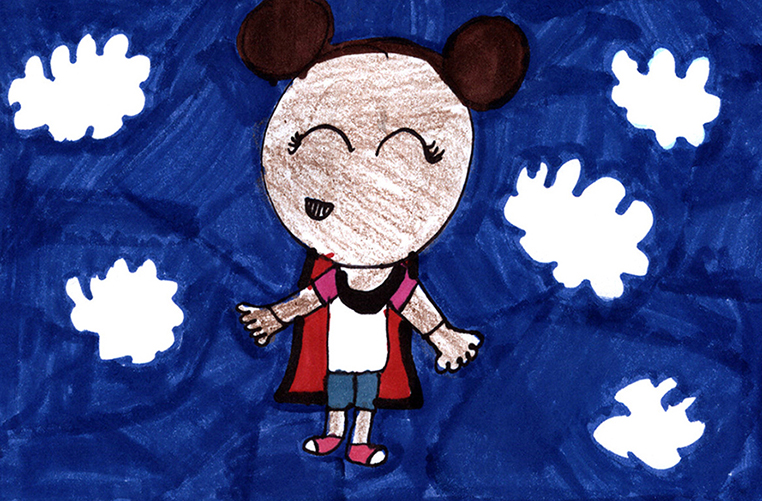 Do you like a can’t stop reading book? Well, you should read Melvin Beederman the Curse of the Bologna Sandwich written by Greg Trine and illustrated by Rhode Montijo. In the beginning, Melvin doesn’t feel like a superhero even though he graduated from superhero academy and was the top student in his class. Whenever he tries to fly, it takes him 5 or 6 attempts to get in the air. He also has x-ray vision, but unfortunately he sees too much underwear. After graduation Melvin is sent to Los Angeles to fight bad guys. When he gets there, he looks for a place to live. He finally finds a treehouse in the middle of nowhere. All of a sudden he hears a cry for help and goes to save the day. He hears another call and looks for the trouble and finds a baby. He swoops down and grabs the baby before he is crushed by a car. Melvin’s cape gets dirty saving the baby so he brings it to the dry cleaners. Three days later he gets his cape back, but it was too small. This time when he hears a cry for help, he tries to run as fast as he can, but he can’t run as fast without his cape. Meanwhile Candace is winning multiple games at recess and flying because she has Melvin’s cape. When the two meet, Candace wants to keep the cape and Melvin remembers that his favorite TV superhero had a sidekick so he has the cape split in half and gives one to Candace, and they become partners. Every superhero has a weakness and Melvin learns his is bologna when his classmates hold up deli meats and when they get to the bologna he falls on his knees and feels faint. So Melvin and Candace go after the McNasty Brothers who have been stealing money from banks all over Los Angeles. The McNastys capture Candace and when Melvin goes to look for her, he finds her tied up and right in front of her is a bologna sandwich. Read the book to find out if Melvin will save Candace and they will capture the McNastys.

I love this book, and I didn’t want to put it down. It was that good. I like the picture that shows Melvin and Candace tied up in the McNasty’s house. In the picture, Melvin has a bologna sandwich in his mouth. I like this picture because it shows Melvin taking the risk of eating his weakness to save Los Angeles. There are a lot of great characters, but my favorite is Candace. I love Candace because she is strong like me. I think she is strong because she was in a play and knocks the door so hard that it falls down and she saves the other actors. My favorite part is when Melvin finds out that his cape is too small. I like this part because is was funny because Melvin looked ridiculous with such a small cape. That’s why I think you need to read this book.