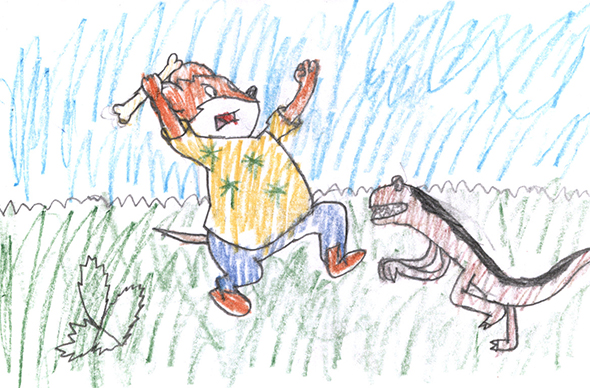 The story Geronimo Stilton dinosaur disaster was a very interesting story about Geronimo Stilton who had a chance to go back in time to see how dinosaurs became extinct. However, he didn’t want to go alone, so he called his friends to come with him. But he accidentally got brung back to the jurassic period by himself. He couldn’t get back because the time machine was stuck. He was nervous and didn’t want to be a belly buddy (AKA breakfast, lunch, or dinner). He got mousenapped by a dinosaur and whooshed through the air. He got out of the dinosaur’s legs and ran back to the time machine. The time machine had gotten unstuck! You’ll just have to read to find out what happens next!

I liked the story because I like dinosaurs and there were dinosaurs in the story. My favorite part was the part when Trap almost became a belly buddy. Hehehehehe. Also, I learned some things about dinosaurs. I never knew that there was such thing as a quetzalcoatlus. I thought that the pictures were really good. They were really detailed. I don’t do shading much.

I’d recommend this story If you are a fan of dinosaurs, then you should definitely read this book because there dinosaurs in the story. I thought it was really good, so I’m going to read the next one!