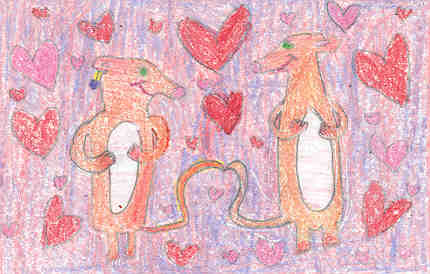 Poppy and Rye is about a mouse named Poppy. Poppy has deeply fallen in love with a mouse named Ragweed, who was in the first book of the series; Poppy. However, Ragweed was killed and eaten by an owl named Mr. Ocax, so Poppy decides to move on. When Poppy decides to travel in search of Ragweed's home with the only two clues her love had given her, she takes a friend. "It's beautiful, to the west of Dimwood Forest," she recalled him saying, "It sits on a hill just above The Brook." While her friend is sleeping, she encounters a wonderful new dance partner and a love for life. When and if she arrives at Ragweed's home- well you'll just have to read the book to find out.

My favorite part is when the mice are battling the beavers. It reminds me of, "The Battle of Bunker Hill," because instead of Valerian saying, "Don't shoot 'til you can see the whites of their eyes," he says, "Don't shoot 'til you can see the gap between their teeth." I also like this book because Poppy was a very interesting character. She was very interesting because she was very brave, strong at heart, and wise, which helped her escape or win battles. The last reason I liked the book was because of the illustrations. Even though they were black and white, they told everything that was going on on that page, but they weren't crowded.

I recommend this book for girls mostly. However, if you like charming yet humorous stories then Poppy and Rye is the story for you! The way this story catches the heart just before it breaks is just amazing. Also, if you like books by Avi, such as, Blue Heron, S.O.R. Losers, The Man Who Was a Poe, or Windcatcher, then I think- no, I know you'll like this book.

Laura B.
is a student in
Mrs. Heidt's 4th Grade Class