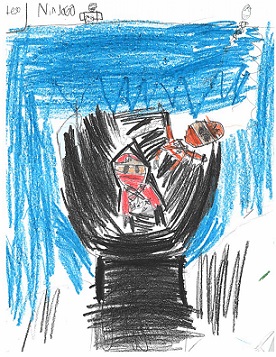 Lego Ninjago book is about the characters Jay, Cole, Jame, and Master Wu. In the book, they have to fight a robot who is trying to destroy their world. master wu is not fighting he was at the camp resting. They each have special powers they use. They have lava powers, ice powers, earth powers, leaf powers, and last water powers! they use their powers to kill Gomodon!!!

One reason I love this book is because it has legos and lego people and real life stuff. It is cool because I like Legos and I like to see them moving like their real in the book. Do you like legos? I also love this book because of zane the Lava man's character. He has a lava sword and lava powers. The last reason it is a great book is because the characters are brave in the book.

If you like fire ice and water powers then you will like this book. You will also like it because of the kind of friendships in the book. I recommend you read it if you like chapter books and graphic novels. If you like playing with legos you will definitely will like this book. I play with legos every day and I feel happy this book. This book is a Lego Ninjago book and there are a lot of Lego Ninjago books in the series that you can find in the lego store in the mall. I recommend you read this if you like legos