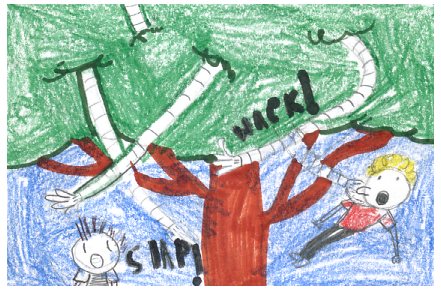 Have you read a story so funny you can not handle it ? Well in the book The 39 Story Treehouse, it is some funny stuff. In the book, there are two boys named Andy and Terry who live in a treehouse. They love to make books, but one day Mr. Big Nose tells them their deadline and it is the next day in the afternoon! So Terry invents a cool machine named the once upon-a-pon-a-time machine to help them catch up to their dateline! But oh no! The machine goes crazy and they need someone to fix it. Read the story to find out if they do.

I love this book so much because there are all of these funny parts. For example, the frogpotamus eats Andy’s ice cream, some guy un-invented himself and the galaxy, and an egg car comes in that hovers in the air. Next thing you know there is a chair that has lasers glued onto it! Also there is some stinky but yummy place named Cheese Land. That is why I love this book so much. This book is part of a series but in many ways it is different from the other books. For example, it does not have ninja snails and does not have as many stories to it's treehouse as the other stories do. As I read this book, I had a lot of thoughts on it. Maybe I could un-invent something just like in the book or create a 39 story treehouse.

I recommend this book to people who like a funny story. Why? Because this book includes cows that can play cards, flying cars that look like they’re eggs, and some guy that can un-invent things! Yeah, it is that funny! That is why I am giving it ten stars!**********

Mia B. is a student in Mrs. Ruprich's 3rd Grade Class