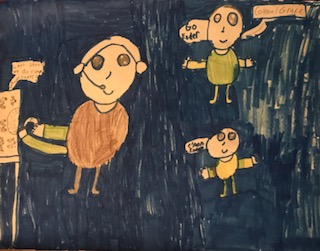 Ender's Game is about a boy who likes to play video games. He finds out a war game is real life and gets taken into training. The game is monsters attack you and you're a fleet trying to take them down. Will the world survive or will it be taken down?

This book is really good if you like Ready Player One. People who like video games would want to read it.

Evan B
is a student in
Ms. Daigle's 4th-5th Grade Class