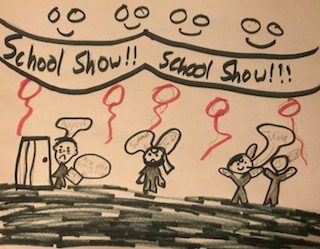 I read a book called Wonder. It is one of favorite books because it is a about this kid named August he is new to the school. He only has two new friends so far Jack Will, Charlotte, and Julian but Julian wasn’t his actually his friend cause he asks, “What happened to your face?" August is a kid with facial problems that he had since he was a baby. And he is struggling in school to make friends. Until he meets Summer at lunch and they eat together. Julian and his friends puts mean notes in his locker that sometimes and say mean things to him. One day August and his friends went outside school on a field trip to see a movie, and when August and his friend Jack Will go to the trees to use the bathroom in the middle of the movie. Then they meet some sixth graders who bullied them and pushed August to the ground. Then some of Julian’s friends came over and stood up for August. And I like that because August is a nice kid and deserves a good life.

My favorite part of Wonder was when Wonder's friends stood up for him because its good to be nice. I found Jack Will interesting because he realized he did something mean to August then he did his best to fix it. Wonder reminds me of me because we are both kids who like to learn and play Minecraft.

I highly recommend Wonder because it is a great book for all ages. I hope you enjoyed my preference of Wonder.

Xavier I
is a student in
Ms. Daigle's 4th-5th Grade Class