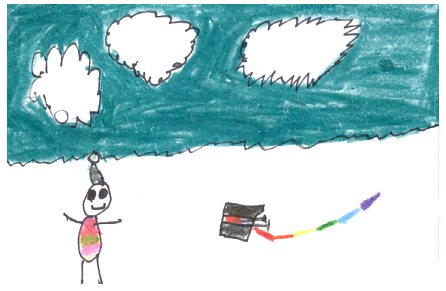 This book is about love and friendship. A girl named Annabel finds a box full of yarn so she decides to knit herself a sweater. There was extra yarn so she knit one for her dog named Mars, too. But there was still extra yarn. When she was walking down the street a boy named Nate said, “You look ridiculous!” and Annabel said, “You’re just jealous.” and he was because he was happier after she made him a sweater. Annabel makes sweaters for everyone in her class even though her teacher said it was impossible. She made sweaters for all the animals and she still had extra yarn. She made sweaters for everyone and everything she passed by like the mailbox, houses, cars and trees and she still had extra yarn. One day an Archduke arrived and he wanted the yarn box. He asked Annabel if he could have the box of yarn for 1 million dollars. But she said no. He hired three robbers to steal the yarn box and when he gets to his castle and he puts on his favorite song and...you’ll have to read the book to find out what happens.

We recommend this book to kids from kindergarten through 5th grade because it teaches you about being kind and giving.