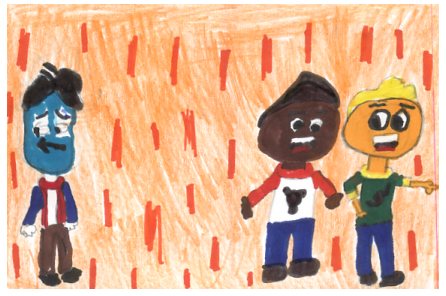 Yippy! Have you ever been thrilled because your best friend is coming to see you? Well in the book, Galaxy Zack Three's a Crowd by Ray O’Ryan, the main character Zack, is thrilled because his best friend from Earth is coming to visit him on Planet Nebulon. Zack and his family used to live on Earth, but now they live on Nebulon. In the beginning, Zack is thrilled because Bert is coming and he is even talking about it when he gets to school. He has told his best Nebulon friend, Drake, all about him. Bert landed on Nebulon and Zack was all over him because he hadn’t seen him in so long. When they got to Zack’s house, he showed him all the cool gadgets and things in his house. The next day Bert goes to Sprockets Academy with Zack and meets Drake. After a while, Drake starts to feel left out. Zack’s dad takes all three boys to Planet Cisnos to go to Lollyland Amusement Park. They went on all different kinds of rides. On one of the rides, Zack and Bert are having so much fun that they forget about Drake. Drake said that he didn’t want to play anymore. Read the book to find out if they can all three be friends or if three's a crowd.

I enjoyed reading this book because Zack has all different things than we don’t have on Earth. He has a personal assistant named Ira that does everything for him. He sets the temperature on his shower, wakes him up to his favorite song, gets whatever food or drink he wants, controls the computers and all the electronics. Zack’s house also has an elevator that can take you to any room in the house. I also really like the illustrations. One shows when Bert is coming to Nebulon. In the picture Zack is jumping up in the air with his arms straight up. He has a huge smile and it made me really excited. All the illustrations show what the words say and describe all the action. Parts of this book made me feel sad. I did not like it when Zack and Bert were having so much fun at Sprockets Academy and Lollyland and they leave Drake out. Drake helped Zack in the first book in the Galaxy Zack series when Zack first moves to Nebulon. In this book he is leaving him out. That really bothered me.