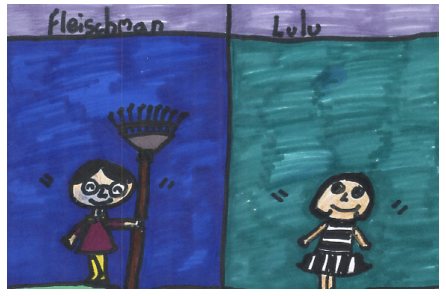 Lulu Walks the Dogs by Judith Viorst and illustrated by Lane Smith, is a funny and entertaining book about a bossy, selfish and greedy little girl. In this second book in the series, Lulu wants something so badly that she would do anything for it. In the beginning, Lulu stands in front of her parents with a poor innocent face pleading for what she wants. Unfortunately for Lulu, her parents say, “No! You have to earn money to buy it yourself.” After that, Lulu’s parents ask her if she has heard of Fleischman, a young boy who helps out a lot of people in the neighborhood and earns money for doing chores. He’s perfect and Lulu can’t stand him. In the middle, Lulu comes up with a brilliant idea to walk some dogs to earn money for what she wants. The next day, Lulu picks up three dogs. The first dog is a big, chubby bulldog named Brutus. The second is a very small furball named Pookie. The last dog is a dachshund named Cordelia who blends in with anything. She gets a call from Fleischman and he offers to help her walk the dogs. After a bit of thinking, she says, fine but warns him to stay out of her way or else. Fleischman noticed Lulu was having trouble so he took over. He spoke German to Cordelia to get her out of her messy backyard, gave Brutus treats to get him to move to the next house, and played the flute for Pookie so she would go to the bathroom. After a couple of days of dog walking, Fleischman said,”We really do make a good team.” Lulu started yelling at him. He didn’t say anything, but just walked away. The next day he didn’t show up so Lulu tried to do all the things that Fleichman did but it didn’t work because she bought a cheap, plastic flute for Pookie, the cheapest dog biscuits for Brutus, and a beginner’s German book for Cordelia. Brutus tied her to a tree, Pookie started yelping, and Cordelia walked away and curled up into a ball and slept. Will Lulu get untied and get the dogs to cooperate with her? Will Fleischman and Lulu ever become friends and will Lulu ever get what she wants? Read the book to find out.

Lulu Walks the Dogs is a very funny book. What especially makes me laugh is the main character Lulu. I love her personality and her actions. Lulu is bossy, selfish, and greedy. She reminds me of Princess Penelope, the main character in Dick King Smith’s book Lady Lollipop. I feel like Lulu and Princess Penelope are both bossy, young ladies who are both very eager to get something outrageous. When Lulu is trying to persuade her parents to give her money she says sweetly, “Why are you being so cruel to me, to your only child.” She also says, “I’ll only eat one meal a day.” Princess Penelope can have anything in the world but wants a pig. Her parents say, “A pig! A pig is a dirty animal!” She says, “It’s not.” When they say, “A pig is a dirty beast!” She continues with, “Is not!” And it goes on and on and on. At the end of the whole thing she screams at the top of her lungs, “I wanna pig! I wanna pig!” This is why I think Penelope and Lulu are alike. I love Lane Smith’s illustrations. The one that really stood out was when Brutus, the bulldog, and Lulu are at his house. When Lulu first meets Brutus, he jumps on her and starts slobbering and smiling. The picture shows Lulu on the ground with Brutus who is three times larger flattening her while wagging his tail. Lulu’s eyes are popping out with fear and his slobber is just about to hit her face. I also really like how the author, Judith Viorst, has two main characters that are opposites. Fleischman is neat and helpful but on the other hand, Lulu is the opposite of helpful. When Lulu went to get Brutus one time, the owner said, “He likes you!” Lulu responds with, “Believe me, I’m not a girl who likes everyone.” On the other hand Fleischman calls Lulu and asks if she needs help walking dogs. He also helps everyone in the neighborhood and says he doesn’t care about the money but just wants to help people out.