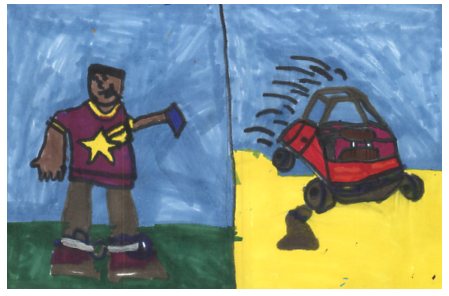 EllRay Jakes is a Rock Star! by Sally Warner illustrated by Jamie Harper is a book about an 8-year old boy named EllRay who wants to be popular. In the beginning, EllRay steals some of his dad’s valuable crystals so he can show the six crystals to his classmates and brag about them. Later, EllRay accidently gives them away to some classmates and his teacher, Ms. Sanchez because he gets carried away with all the attention. When his dad gets home, he goes to his office and sees the six crystals are missing and he gets really angry. The dad originally blames the new electrician and is about to call the police when EllRay confesses. EllRay’s dad gives him an ultimatum. He tells him that if he doesn’t give them back the next day, he will go into EllRay’s classroom and get them himself. For EllRay that would be very embarrassing so he comes up with some interesting ways to get them back. Read the book to find out if EllRay gets all six crystals to his dad in time.

EllRay Jakes is a really good character in a very fascinating story. I think the author draws pictures that really go along with the text. My favorite picture is of an ATV (all-terrain vehicle). This is my favorite picture because the ATV has flame decals that are cool and it also really goes with the scene where the boys in EllRay’s class are bragging about their dads. The picture also shows the ATV flying through the air with Jared’s dad driving it. In the story it says that Stanley and Kevin are defending each other’s dads and Stanley is defending Jared’s dad by saying he has a cool ATV and solid gold jewelry. Kevin is saying his dad has way more money because his dad does not spend it on ATVs. I like the part when EllRay gets to stop his dad from calling his teacher. EllRay does not want to get embarrassed by his teacher in front of the class. EllRay says, “You can’t do that.” EllRay thinks “How could I ever live it down? The two friends I have, Kevin and Corey, might never want to talk to me again!” That makes him have to get the crystals back before the next day. I really like EllRay as a character because he is clever. When he is trying to get the crystals back he tells Cynthia that he will bring her blue flowers from the supermarket with the glitter around the edges to match her eyes even better than his dad’s crystal. He makes up that fake reason on the spot. Those are some reasons why it is a great book.

I recommend this book to kids in 4th grade and under because each book in the series has quite a bit of text with some complicated words. The author does a good job helping the reader understand them. Also I recommend this book to people who get out of tricky situations. I hope you enjoy the EllRay Jakes series as much as I did.