Arthur and the Crunch Cereal Contest

Arthur and the Crunch Cereal Contest 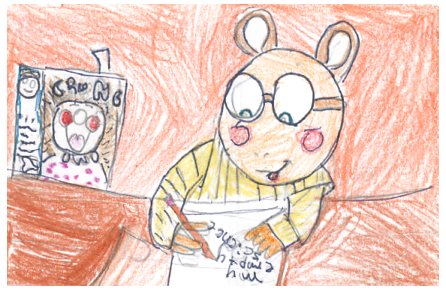 Arthur is 8 years old. He has a little sister named D.W., a mom and a dad. Arthur also has a best friend named Buster. In this book, Arthur gets an envelope in a cereal box. It says, “Welcome to the Crunch Cereal Jingle Contest! Send us your song and you could win a year’s supply of Crunch Cereal!” To win the contest, Arthur has to come up with a jingle for the cereal and turn in 20 box tops from the cereal box. Arthur tries and tries but he can’t come up with a jingle. So Buster suggests that Arthur create a band. Arthur holds auditions with Binky, Muffy, Buster, Francine, Sue Ellen, Prunella, the Brain and Grandma Thora. They form a band and call it the Crunch Bunch Band. D.W., Arthur’s younger sister, wants to try out but Arthur won’t let her. The band tries out instruments in Arthur’s garage. The music is really loud and the neighbors get annoyed by it. They complain and a policewoman comes to the door of the garage. She gives the band a warning. Sue Ellen and Muffy don’t want to get arrested, so the band packs up and says they will be back after lunch. The band gets back together and they are all sad because they don’t have a jingle yet and the contest is coming soon. Suddenly, Arthur comes into the garage and… You’ll just have to read the book to find out!

Arthur and D.W. made me laugh when D.W. said, “Oh everyone thinks that my brother stinks like a piece of yellow cheese!” I liked when the illustrator made a really funny drawing of Binky when he was playing the saxophone because Binky made a really funny face. My favorite character is Buster because he is kind. For example, Buster helps Arthur when Arthur has a dream that everyone is booing him because of his jingle.

I recommend this book for kids ages 6 to 9 because it’s not too hard and it’s not too easy. I also think 6 to 9 are perfect ages because Arthur is a children’s series and TV show.