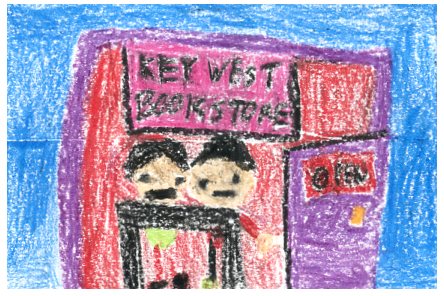 Timmy Failure, a boy detective that thinks he’s the best detective in the world but really isn't tries to escape from his mom’s honeymoon at Key West, Florida with his cousin/unpaid intern Emilio and ends up doing many strange things in attempt to get out of Key West and away from his mom’s honeymoon. He sells the furniture in the hotel room that they are staying in to receive the ability to ride a taxi home, but he loses that money and with it, the ability to ride a taxi home via his polar bear Total blackmailing him from Cuba. Next, Timmy says “ We’re moving the agency to Cuba.” and makes an attempt to swim across the ocean from Florida to Cuba with Emilio. Unfortunately for Timmy, this ends up more failed than trying to kill an incredibly hungry tiger with a wet cheeseburger. Then, well, you’ll just have to read the story to find out what else happens!

I like this book because it reminds me of all the small businesses I’ve started, including a spy corporation and a candy store. Additionally, whenever I read a single page with Timmy Failure’s evil ( or at least Timmy thinks she is ) enemy, Corrina Corrina, I can relate to my 1st grade enemy. One of my favorite parts is when he sells the property of the hotel that they’re staying in and, unfortunately, ends up giving it to his polar bear, Total, blackmailing him from Cuba to raise money for more Cuban sandwiches ( even though I have no idea how a polar bear could blackmail people, buy Cuban sandwiches,or even know know where Cuba is ). I think this book is very relatable for kids who like starting small businesses because Timmy Failure also has a small business ( a detective corporation ) that he started. I especially like Timmy Failure because I think he’s a very hilarious character. I really like the illustrations because they make the book look like a real-life experience.

I recommend this book to kids who like amusing detective stories because the main character Timmy Failure is very laughable and all the characters are humorous in some way. Also, the illustrations make the book feel so real-life like I can’t recommend it enough. Additionally, the author writes such humorous pages that if he was writing the 1st book ever written in the history of the world, I’d bet you cash that he’d do a very good job. So, if you are reading this and you like entertaining detective stories, I heavily suggest you run to your nearest bookstore, buy this book, run back to your home, sit on your couch, and read this book.