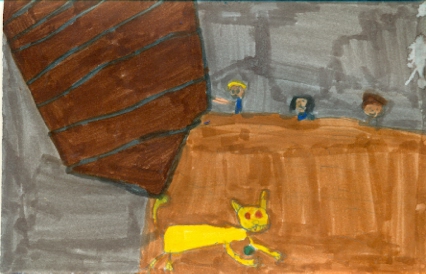 Do you like mystery books? Then A to Z Mysteries: The Jaguar’s Jewel is the book for you! It is about three kids named Dink, Josh and Ruth Rose who are detectives trying to figure out who switched Dink’s uncle’s jaguar’s jewel with a fake one. The three kids thought of some suspects and went to find clues who might have done it. Read this book to find out who did the crime!

I like this book because it is a mystery book. Mystery books are fun to read because they have detectives and clues and suspects. It is fun trying to figure out the mystery while reading. My favorite part was when the kids Dink, Josh and Ruth Roes find out who the thief is. That was my favorite part because if they did not know who the thief was the jewel would be switched forever. This book is part of the A to Z mysteries series. It is similar because all the books have all same detectives. The book is different because it is about a jewel that has been switched with a fake one!

I think other kid’s should read this book because it is a mystery book and if kids like mysteries this book is the book for you. The type of reader that would like this book is a 2nd through 4th grader. I think the reader would enjoy the part in the book when the kids Dink, Josh and Ruth Rose find out who the thief is!