Mr. Jack Is a Maniac!

Mr. Jack Is a Maniac! 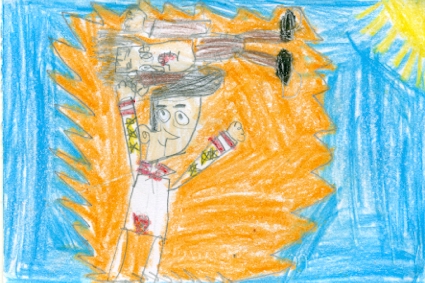 My book is about a class that goes outside. Dr. Brad and the kids sat in a circle on the floor and talked about how people need to be nicer to other kids. Then, they thought they heard a bear, but it was Mr. Jack, he was riding a motorcycle. Then, all the girl teachers came running outside and crowded Mr. Jack. Then, all of the boy teachers came running outside and they were fighting Mr. Jack. Then, Mr. Jack was teaching the kids how to use self-defense and how to make themselves look big. While the principal was giving an announcement all of a sudden a bear broke into the school and Mr. Jack didn’t want to fight the bear so AJ and Andrea were going to fight the bear. Do they succeed? Read the rest of the book to find out what happens.

I like this book because it is interesting and funny. Also, it is about karate. I like karate because the kids had to dodge ping pong balls. They also had to know how to use self-defense. My favorite part is when Mr. Jack was fighting all the boy teachers. I found Mr. Jack interesting because he is good at fighting and he is good at teaching the kids karate. I liked AJ because he fought a bear at the end of the story.

I think someone should read this book because it is very funny and interesting. The type of reader that would like this book is someone who likes to laugh and who enjoys funny stories. I think the book might interest the reader because it is about karate and karate is fun for some kids.