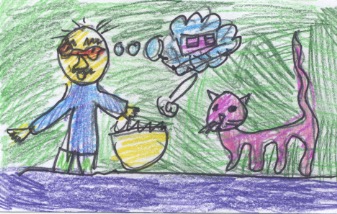 Mrs. Teaberry is a lady next door to Mr. Putter. They are friends and they go on lots of adventures together in the different books in the series. Mrs. Teaberry has an idea. She says, “Do you want to go no a train?” Mr. Putter says, “I’m so excited. Can we bring pets?” Then Mrs. Teaberry says, “Of course!” But then they got there, the lady said that pets are not allowed. So they have a plan. They go back and when they come back they look a little different and they are let onto the train. To figure out the rest, you have to read the book!

I like Mr. Putter and Tabby because they’re really nice and kind to other people like their friends. I also like Mr. Putter because he shows a lot of perseverance. Mr. Putter had a friend that helps him named Mrs. Teaberry and she is also really nice and kind. I like this book because they stick up for each other and they always have really fun adventures and never give up. This book reminds me of when I was in London with my cousins and I went on a train with them. Mr. Putter also reminds me of one of my old teachers and my old teacher was very kind, just like Mr. Putter. My favorite part is when they went on the train and had to be sneaky. These characters really have personality and have sneaky plans and ideas and they are really smart! When I read this book, I could not stop reading. It feels like a never ending story - it’s so good! I love this book because the characters are adventurous and very caring and kind. That is why I think you should read the book!

I really like this book because it has lots of sneaky ideas and if you like funny books, then this is the book for you! Mr. Putter and Tabby Take the Train is really fun and funny. I think you should read this book because it's funny and if you are in first grade, second grade or third grade then this is the book for you! This book is probably even good for every grade and anybody who wants to read it.

Zoe F.
is a student in
Lindsey's 2nd Grade Class