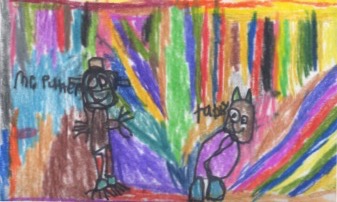 I like the book Mr. Putter and Tabby Dance the Dance because I also have a cat at home named Coco. I thought Zeke was funny because he grabbed a man’s tuxedo tails and then Zeke grabbed a lady’s poodle skirt. I also thought Tabby was funny because she batted the sparkles on the walls with her paw. This book is a series book. It is different than all of the other books in the series because it is about dancing and none of the other books are about dancing. I also liked the pictures because they helped me understand the book.

Rex W.
is a student in
Lindsey's 2nd Grade Class