Reviewed by student in Pam's and Elissa's 2nd Grade Class 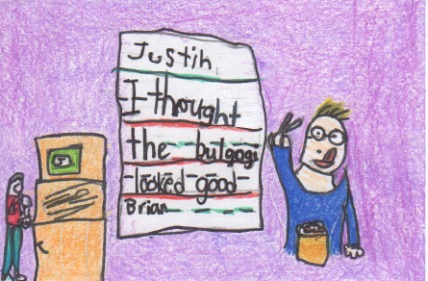 The Invisible Boy is about a kid named Brian who feels invisible because nobody pays attention to him at school and nobody likes him. The Invisible Boy seems invisible because everybody’s either ignoring him or being mean to him and not choosing him for their kickball team. It’s not fair to him. They’re just picking the same players every time and leaving Brian out. A new kid named Justin comes into the class. When Justin came in, Brian smiled at him and made eye contact with him. They became friends. At recess they were playing with each other. When the teacher said find two or three partners for a special project, Emilio chose Justin before Brian could. Then Justin said they could be a group of 2 or 3, so he added in Brian and made it a group of 3. Because of his friendship with Justin, Brian felt more included and ended up with a couple of friends. In the illustrations, at the beginning of the book, Brian didn’t have any color. This happened because he was sad. When he was happy, the illustrator added color to Brian because he now felt as though he was part of the class. This book teaches us to include everyone and not to leave anybody out. Just say to yourself, “How would I feel if I were Brian?” Read the book and you’ll see what happens next… Does Brian keep his color?

We think this book is a good book because it teaches a good lesson about friendship and including everybody. We think you should include everyone. How would you feel if you were left out? We think this is a thoughtful book because Brian thought to himself, “What’s worse, getting laughed at or not being included?” We felt sad for Brian in the middle of the book when he had no friends and no one was paying attention to him. When Justin came, it was good because Brian had a chance to develop a new friendship. We think it’s good for Brian to have friends, and his friendship grows during the book. We thought it was nice that Justin complimented Brian when he was drawing something with chalk at recess. We liked that Justin gave a compliment before walking away. We like the part when Justin comes into the class and they had to do a project in groups of two or three. Brian wanted to work with Justin, but Emilio was already partnered up with Justin. Justin said that Brian could join too and be a third partner. We think the illustrations are unique and inspiring. The illustrator did unusual things. For example, there is a dragon toasting marshmallows with fire coming out of his mouth. Our favorite character was Justin because he was nice enough to go up to Brian and be his friend when no one else would. That takes courage.

We think that 1st graders through 5th graders will like this book because it sends the message that even if you have a lot of friends, you should still try to make more new friends. We recommend this book to kids that want to make new friends like Brian did. It’s important to be a good and kind person. This book might help kids make new friends. You should always try to make new friends. They can support you if you need it and you can support them. The Invisible Boy has unique illustrations. People that like art and that like many colors would enjoy the illustrations. We recommend that teachers read this book to their class because this book sends a good message that is don’t judge kids by how they look. You should always try to make good friends. As we said, the most important part of being a friend is being kind and thoughtful.