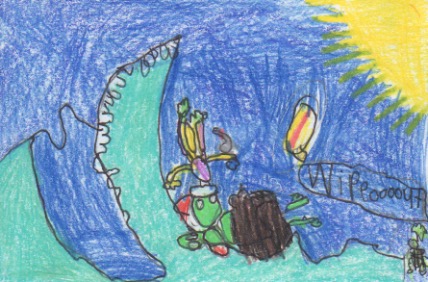 A frog that is a kid who is named Froggy wants to act really funny and silly. He acts too silly and they surfed, did a hula and climbed a volcano. He almost fell in! He caught on his dad’s neck. The next day they went surfing. The mom said, “Wipe Out!!” They fell. The last day in Hawaii they went on a boat trip and he felt a little seasick and his face looked greener than usual. Then he had to be the first one in and he forgot his bathing suit, so he went in with his underwear. When he jumped in, he had his dad’s binoculars. He saw a giant sea turtle and threw the binoculars at his dad and started swimming after the sea turtle. His dad said, “Wait for me!” They swam and swam… Read the book to find out what happens next.

My favorite part was the part when Froggy almost fell in the volcano because he was surprised that he almost fell in. I thought the part when he forgot to put on his clothes was funny. Another part I thought was funny was when Froggy forgot his swimsuit and he had to go in his underwear. He jumped in and realized he had his dad’s binoculars and then he saw a giant sea turtle so he threw the binoculars at his dad and started to swim after the sea turtle. Another thing that made me laugh is when they were surfing and they fell and the mom said, “Wipe Out!!” This book made me feel silly after I read the book.

I recommend this book to first through third graders who like funny and silly books because Froggy Goes to Hawaii is funny and silly. The part when Froggy fell off of the surfboard and a mom yelled “wipeout” was super funny! Another example of when did something funny was when he forgot his bathing suit so he had to go into the water in his underwear. Read the book to find out what other funny things Froggy does.

Jake M.
is a student in
Pam and Elissa's Class