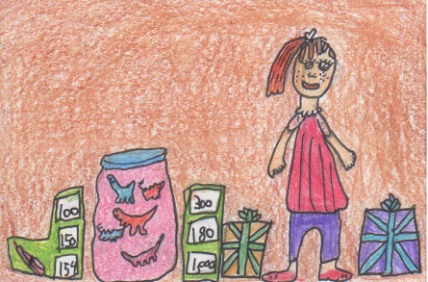 Have you ever known a girl that has such an amazing memory, it is like a camera? The sound of the camera is “click.” When Cam Jansen wants to remember something, she says, “click.” Cam and her friend, Eric, are going to a birthday party. The birthday was a dinosaur party. It was a game. They tried to guess how many dinosaurs are in a jar and whoever wins, gets to keep all of the dinosaurs in the jar. The person who won guessed the exact number. Did anybody cheat? They also played other games. One of the games was musical chairs. Cam said, “click.” She was thinking about the dinosaur game and how the person who won guessed the exact number. She thought, “That is weird that he guessed the right number.” Do Cam and Eric figure the mystery out? Is it true? Did he actually guess the right number?

I liked the part when Cam Jansen figures out the mystery because it is cool and amazing how Cam figures things out with her great memory. I think it is strange that her friend, Eric, was one of the people that got so close to the right number. The illustrator puts a lot of detail in the pictures, so you can look at the pictures and that can give you a clue on what to read. My favorite part in this story is when Cam is trying to guess the right number, because she tries to count them, but many dinosaurs are in front and in the back of other dinosaurs, so it is hard to guess the exact number. I like Cam because she really helps solve the mystery and Cam really thinks about the mystery and not a lot of people have enough patience to do that. In the story, they are at a birthday party and they play games and that remind me of when I go to birthday parties and we also play games. The thing that I wonder about in this book is if Cam actually wants the dinosaurs or if she just wants to win the game. When I read the book, I felt happy because in the end, Cam solves the mystery.

Kate R.
is a student in
Pam's and Elissa's 2nd Grade Class