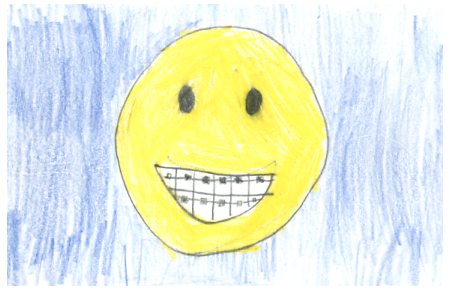 Oh no! Raina knocks out her two front teeth and there permanent. They rushed to the dentist. He put something on her teeth that is like a cast. She went home and fell asleep. When she woke up she felt like she was going to barf because she had to have really bad pills. Her mom said “You get to stay home from school” HORRAY she thought. A few weeks later she went to school. Everyone teased her even her friends. Her summer was normal she was a counselor for Girl Scout camp, going on long trips sitting next to two very annoying siblings and camping. Summer is now over. She was now in 7th grade. Her classes are normal. Her last class was band. Since gym was before band, she smelled. When she got to band there was a boy, he was cute. Raina was nervous because the only seat left was next to him. She sat down. He smiled he had braces to, now Raina is not nervous anymore. Months went by. The valentines dance was coming up. But she liked someone else! The boy she liked asked her to go to the dance with him. But she said I don’t know. She did not go to the dance! How will 8th grade and high school turn out?

My favorite part was when she knocks out her two front teeth because that’s how the story starts. It reminds me of when I lost four teeth and I looked like a vampire. It also reminded me of when I got two teeth pulled and I looked sort of odd.

I recommend this book to kids 7,8,9 and 10 because there's drama and it is a graphic novel. If you like graphic novels you will love this book!