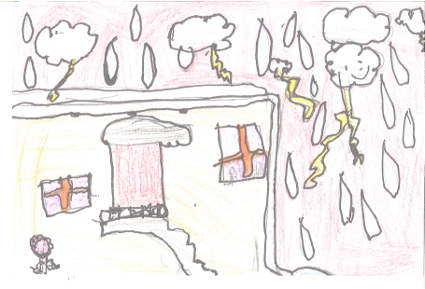 In the book, Because of Winn-Dixie, a girl named Opal went to the store to get white rice, some tomatoes, and mac and cheese, but she came back with a dog. She named the dog Winn-Dixie. Read this book to find out what adventures Opal and Winn-Dixie go on, and what trouble they find. They also meet many new friends on their adventures.

Hi, my name is Kamari, and my favorite part of Because of Winn-Dixie was when Otis had let the animals out of the cages when they were at the pet store because he knows how it feels to be locked up. This was my favorite part because I love animals, and I would love a dog, because they are so playful. I cannot have one because we can not have pets where we live. The character in this book that was my favorite was Otis, because he was very compassionate when he let the animals out of the cages. The character that I made a connection with in Because of Winn-Dixie was Opal, because I fed a dog by my school, his name was Juicy. Juicy was big and fat and was scared of rain too, like Winn-Dixie.

Hi, my name is Zaira and my favorite part of Because 0f Winn Dixie was when Winn-Dixie was licking the peanut butter. It is funny how dogs eat peanut butter. The character in this book that was my favorite was Opal because she is so kind to animals, like Winn- Dixie. She was brave enough to save Winn- Dixie from going to the pound. The character that I made a connection with in Because of Winn- Dixie was Opal. The reason that I made a connection with her was because I like animals like Opal.

I (Kamari) recommend this book to the first grade because they will like it. It has a girl named Opal and a dog named Winn-Dixie. You will want to read it over and over again.