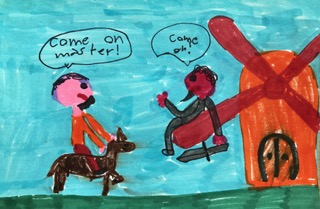 Don Quixote is about a man that loved adventures because he read too many books about knighthood. He was going on a lot of crazy adventures with his squire Sancho Panza. They went together on a lot of weird trips!

Don Quixote is such a crazy man. For Sancho, it's kind of hard being an old man’s squire. Sancho had to face a lot of troubles in his squirehood. My favorite part was when Sancho got tricked. I like Don Quixote because he never does anything normal and just cares about knights. I think it is very funny and full of very crazy adventures with Don Quixote and Sancho Panza around the city of La Mancha because I love the way that Don Quixote fights all different things that are not real!

I recommend this book because it might be very interesting to you because it is pretty exciting.