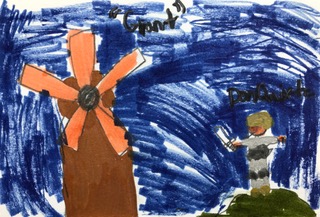 Once there was a man. His name was Don Quixote. He wanted to be a knight, so he decided to become one. He had a squire named Sancho, who was lazy and chubby. They went on weird adventures. On one of the adventures he went and fought windmills, calling them giants. The lesson to the story is don’t be crazy.

I think that Sancho was very funny because he doesn’t want to go along with Don Quixote’s adventures but he gets dragged along anyway. I feel excited when I read this book because you never know what crazy thing Don Quixote is going to do next. It made me wonder, “Could anyone actually be that crazy to think that windmills are giants!?” This book was nothing like any other book I’ve ever read because I’ve never read about a knight that is crazy like Don Quixote. Knights are usually brave and strong. I think that this book is cool because they go on different adventures and at the end Don Quixote becomes sane again.