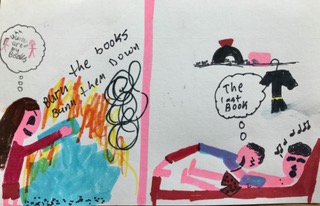 Don Quixote is about a man that liked adventures and wanted to be a knight. So he got a squire and set off on an adventure to do what he always wanted to do.

The part that stood out to me the most was when Don Quixote thought windmills were giants because it was funny to think about him charging at the windmills.

My favorite characters were his squire, Sancho, because he went along with Don Quixote’s plans to become a knight because they were friends and he was being kind. A part that was unique was how they explained how Don Quixote was crazy, and not all books explain that much about people’s actions. Don Quixote reminds me of a girl in another book named Sunny who was also kind of crazy. I felt excited as I read the book, and in every chapter I wondered what would happen next.

I would recommend this book for people who like funny books and adventure. I think people will like the part where Don Quixote realizes that his adventures are becoming a little out of hand and when he came home and realized that he can’t sneak out anymore and he becomes sane.

Mia B.
is a student in
Ms. Daigle's 4th Grade Class