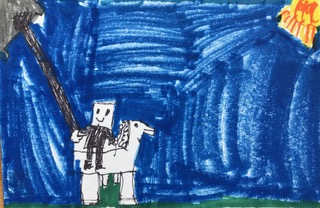 I like Don Quixote because there are new things happening in every chapter. The book is about someone named Don Quixote who wants to be a knight. Don Quixote goes on a "flying horse" and has other adventures. I liked it a lot because I like having new things pop up.

My favorite part of this book was when don Quixote was fighting the windmills because he thinks they’re giants. The characters I liked were Don Quixote, Samson, and Sancho because they’re all funny.

I think you will like this book because it isn’t too long. Funny things happen a lot in the story. There’s a funny puppet show and Don Quixote freaks out. Don Quixote is a person who is alone and then not alone. Don Quixote is crazy at the beginning of the book and then is sane. So I recommend you read this book.