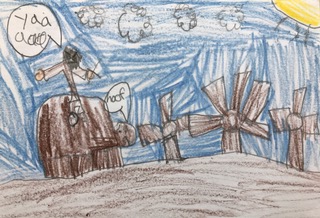 Adventures of Don Quixote is about a crazy old man. Don Quixote knows a lot about knighthood, but he gets too crazy about it. He read too many knighthood books. Then he started going on adventures with his friend Sancho. He thought that a pub was actually a castle. He freed prisoners from some guards and then they ran away. Here’s some advice: never read too much about knighthood or you would become a crazy knight.

I think that this book is funny because of his adventures. My favorite part is when Don Quixote runs into a windmill because it is funny. Sancho reminds me of Albert Einstein because they are both smart. I think Don Quixote is special because it's funny and I like the comedy.

I recommend this book to people who like comedy or funny things.