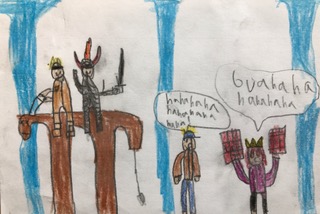 My favorite part is when Don Quixote recruits a farmer to be his squire because he never got any squire training so that is funny. I like this book because it is very funny, you think it’s one genre but when you finish it it’s a different genre, so it is very unique. I found Don Quixote the knight very interesting because he is an insane knight that and he is an odd character. The reason I like him is because he never gets down by his peers teasing him.

I recommend this book for young readers because it is a chapter book that is not too advanced and it is funny.